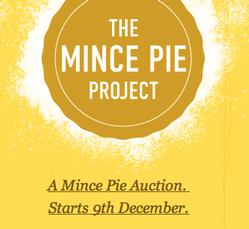 St. JOHN has entered the friendly frey and is offering a box of 50 of our mince pies to the highest bidder in the run up to Christmas in aid of the Mince Pie Project.

We're currently No. 4 in the rankings, all proceeds from the online auction go to Action Against Hunger so stuff yourself silly with mince pies safe in the knowledge you're doing a good charitable deed at Christmas.